Depressing. That would be one world to sum up “The Pearl” by John Steinbeck.

I know I read this in school – not sure what grade and what the purpose was. I can say that same thing for a lot of the literature that passed before my eyes. 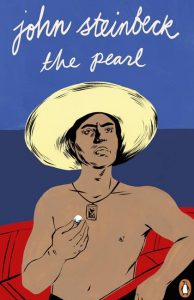 I revisited the book (Viking Press, 1947) because Steinbeck wrote it after being in La Paz, Mexico, which is just an hour from Todos Santos and is the capital of Baja California Sur. The images were done by José Orozco, who I was introduced to earlier this year when I was in Guadalajara.

“The Pearl” is in part about family, poverty, dreams, and the evil of greed. The basic consensus would be money can’t buy happiness. It’s a hard, tragic lesson for Kino, the pearl diver, to learn.

I had forgotten how sad the book is. Still, there are lessons to be taken from it. It’s a glimpse at humanity, and how money/wealth or the lack thereof plays a part in how we treat one another. It shows examples of how people are changed by the prospect of wealth.

In the version of the book I read published by Penguin Classics is an 18-page introduction by Linda Wagner-Martin. It read more like an abridged version of a thesis on the book. It’s her analysis of the book, giving perceived insight into Steinbeck’s thoughts. While her perspective was somewhat interesting, it wasn’t a normal introduction. It would have been better to have been at the end.