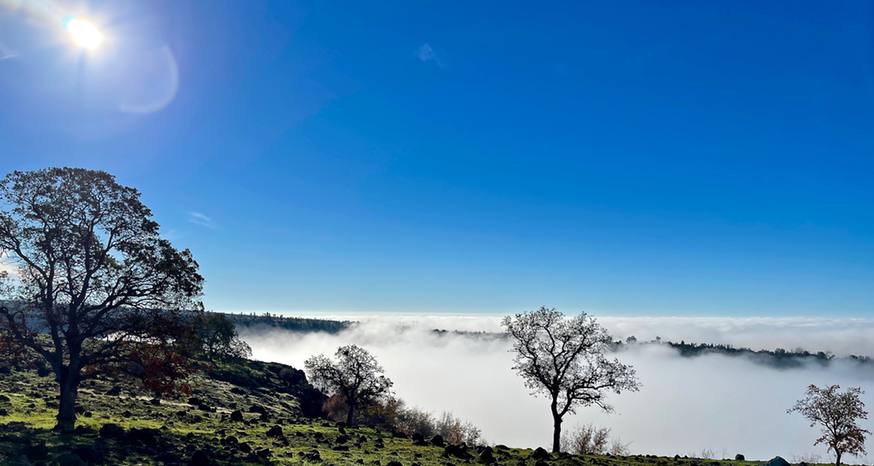 Trek in Upper Bidwell Park a loop through constant beauty

by Kathryn Reed | Featured, Outside | 0 comments

Ascending from the foggy parking lot, it didn’t take long before we were above the grayness. Remarkably, though, it was that layer of fog that created some of the most stunning scenery.

While thick in the canyon within Upper Bidwell Park in Chico, the fog became wispier at the sun burned through that watery mist. The filtered sunlight, the backlit oak trees—it all added to the delightful mid-November hike. 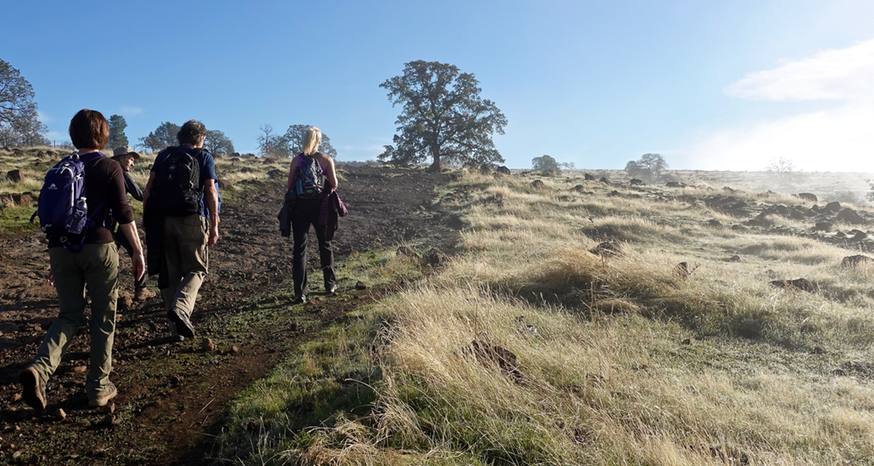 In some places it was like a moonscape with the basalt rock scattered about the landscape. Only the rocks were strewn about on fresh green grass from the early November rains instead of barren ground.

The route we took under the guidance of a Chico Orville Outdoor Adventurers leader is not one I would have done on my own. This is because to me it looked like the North Rim Trail ended and we were going to have to retrace our steps. 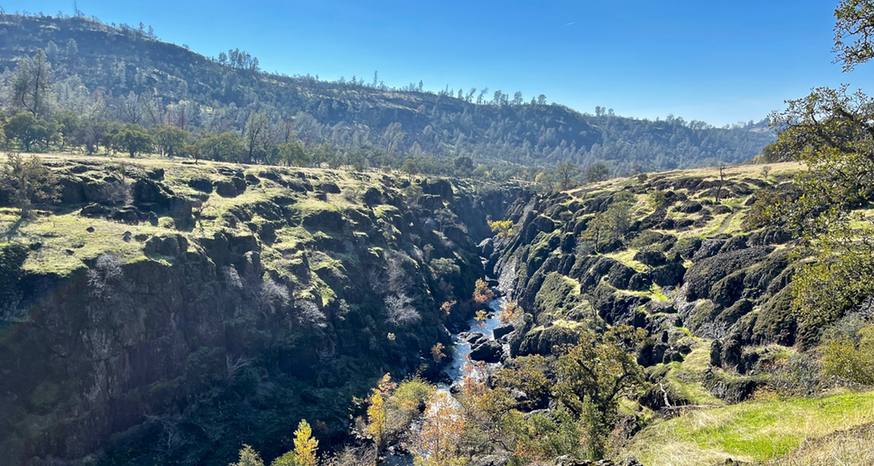 Over the edge we went. Yes, there really was a trail there that was not well traversed. All the better to feel like we were exploring a bit.

Before we got to that point we had some fantastic views of the park, into the lush city-owned Sycamore Canyon, and way beyond to the snow covered Trinity Alps.

Much of the North Rim Trail is wide enough to walk two abreast. Remnants of last summer’s fire are still visible. 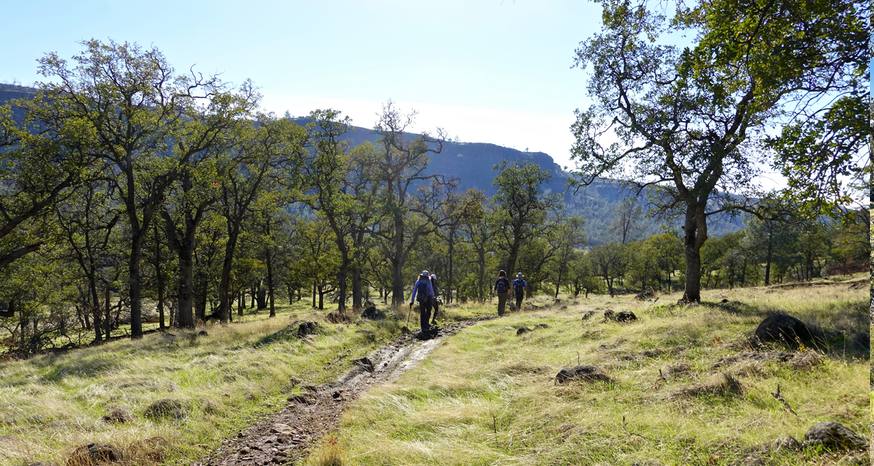 We did bushwhack a bit between North Rim and B trails, but not much. Then we hooked up with Middle Trail, before finishing the trek back to the Horseshoe Lake parking area via Yahi Trail, which parallels Big Chico Creek.

It was a glorious day to be hiking in our “back yard” with some fall color still apparent and the winter greening just beginning. 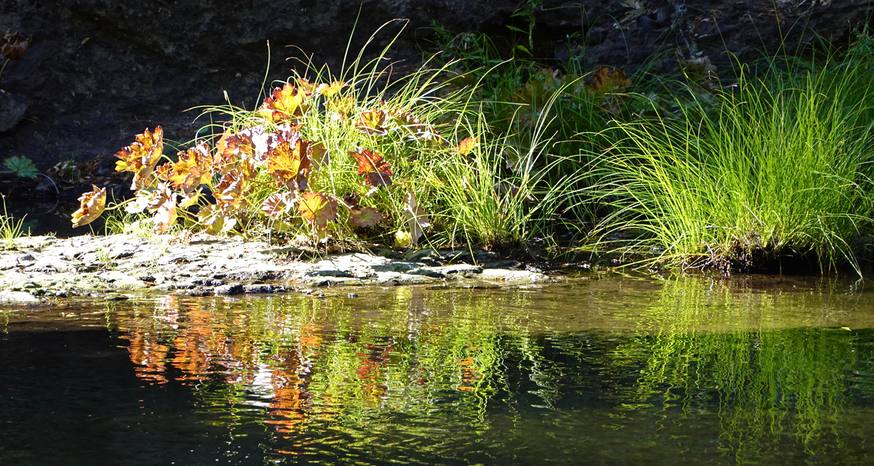 Abundance of beauty on trek to fish ladder

by Kathryn Reed | Featured, Outside | 0 comments

In less than 2 miles we arrived at a man-made contraption in the middle of the forest that is saving the lives of countless fish.

“The project is truly an engineering marvel: located in a deep canyon, with no road access, approximately 500 tons of rock were excavated out of the old fishway area while a new one was built, using pre-cast concrete panels roughly 7 feet deep, 10 feet long, and almost 7 feet wide, to form a series of 14 pools and 15 weirs that help fish get upstream of the waterfall,” according to the U.S. Fish & Wildlife Service.

The fish ladder, at a cost of $2.5 million, was completed in December 2017, replacing a steeper less elaborate one built in the 1940s. 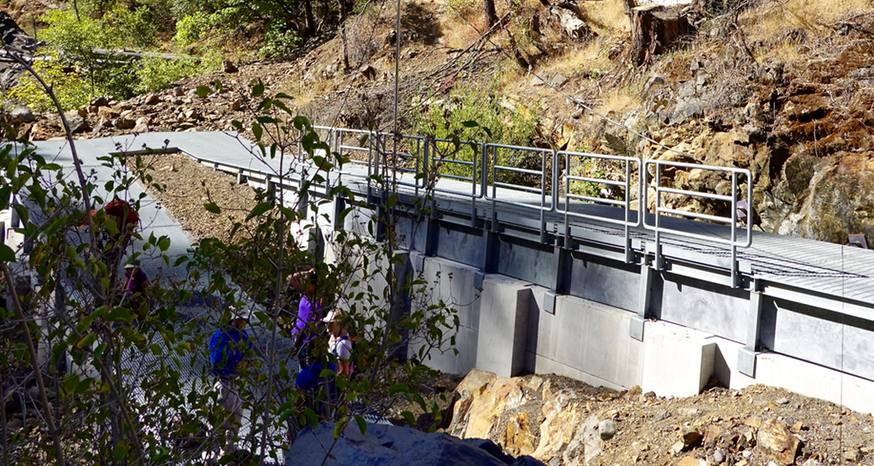 Fish ladders are built to help fish around culverts, dams and waterfalls. In the case of Deer Creek there is about a 15-foot waterfall impeding their migration. (Salmon swim upstream to spawn, with the little ones going downstream to the river.) The ladders allow them to jump into a pool where they can rest before jumping into the next one until they bypass the obstruction.

We only saw one salmon in the pool (outside the ladder) before the waterfall. 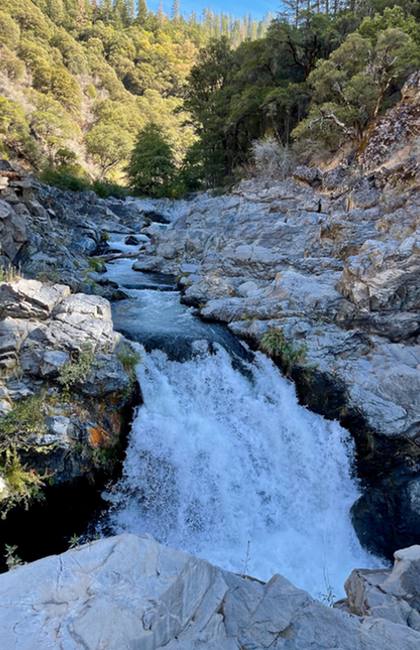 Deer Creek, Mill Creek and Butte Creek are the remaining tributaries of the Sacramento River with native runs of the Central Valley spring-run Chinook salmon. There used to be more than 2,000 miles of stream habitat for these fish; now there are only a few hundred miles.

Lower Deer Creek Falls is about 35 miles upstream from the Sacramento River.

We started off Highway 32 in the Lassen National Forest. Though the trek is fairly easy, the beauty was incredible along the entire route. 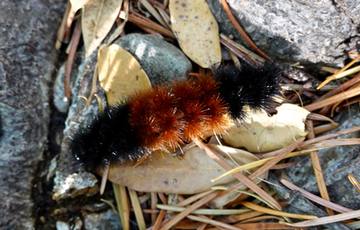 The Old Farmer’s Almanac has this to say about woolly bear caterpillars: “If their rusty band is wide, then it will be a mild winter. The more black there is, the more severe the winter.” (Image: Kathryn Reed)

This is a mixed conifer zone, so the landscape seemed to be changing as we headed downstream from our starting point. Douglas fir were the predominant trees in the low dry zone, though oaks were interspersed. Ponderosa pines were closer to the starting point.

Spires of volcanic rock rose from both sides of the creek.

The path was compact dirt most of the way, with some embedded rocks that made looking down a necessity. One spot required a bit of limbo with the fallen tree. 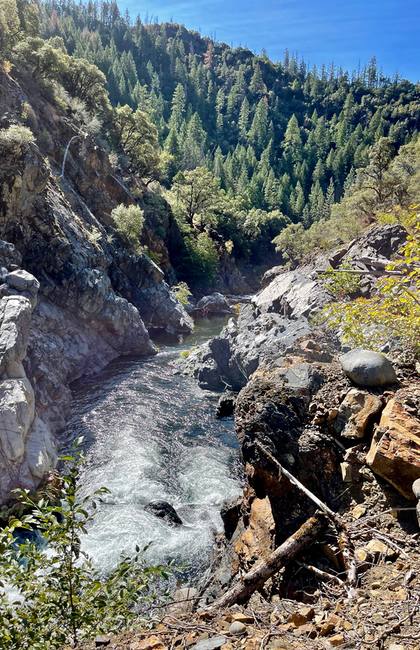 We could hear and see Deer Creek most of the hike. What was most surprising was how much water was flowing on the first Saturday of October. At times the water was tranquil, other times it was rushing. This was especially true at the fish ladder where the water roared through the canyon.

This would clearly be a completely different hike in spring/early summer with the runoff. A few times we passed what would have been areas to cross with water on the trail during the wet season.

Not much fall color was to be seen, but still there was a distinct sense the seasons are changing.

While no bears were visible, their scat was. The only interesting wildlife was a woolly bear caterpillar. The folklore in Tahoe was that seeing one means winter is on its way.

We started at 3,323 feet, with the lowest point being 3,131 feet. We logged 3.96 miles. The 19 of us on this hike were part of this Chico Oroville Outdoor Adventurers. 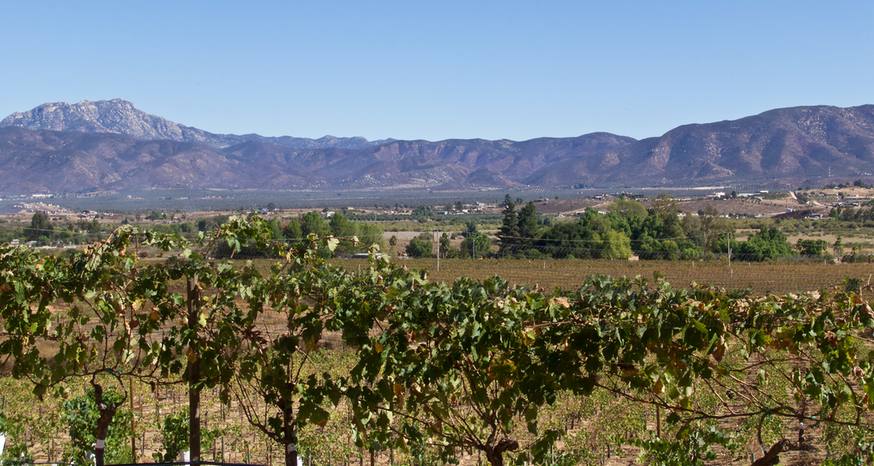