Cookbooks aren’t just for learning new recipes. They can be picture books, history books and so much more. Such is the case with “Not Food for Old Men: A Mexican Culinary Adventure” (Sime Books, 2015).

While it has expected chapters like Salad, Soups, and Tacos; Seafood; and Desserts and Cocktails, there are also sections about whale watching, all of the chefs who contributed to the book and more. The book includes how singer Jim Morrison was a regular visitor to Ensenada. I now know the Caesar salad was first created by chef Livo Santini at the Hotel Cesar in Tijuana. 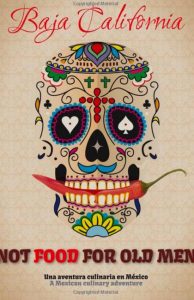 The disappointing section was on the Hotel California in Todos Santos. It says the Eagles song by the same name is about this lodging establishment. That is completely wrong. The Eagles sued the Todos Santos hotel for trademark infringement. The lawsuit was settled in 2018. Hopefully, future editions of the cookbook will set the record straight.

The cookbook was part of a package I “won” as the high bidder at the Gastrovino event a year ago this month. While there are not a ton of recipes I would use because of being a vegetarian, I’m still not sure I’m ready to pass the book on. Often I can substitute meat/fish for something else like tofu or a portabella mushroom. Mexican spices, sauces and all those peppers are delicious. Plus, there are a few drinks I’d like to try like the Kiwi-Jalapeno Margarita.

While I didn’t read every recipe, all are in Spanish and English. Most of the translations are good, and when they weren’t, I could figure it out. For instance, one place it says to strain things in cilantro when it should have been a colander.

The photographs are outstanding. More have to do with scenes in Baja than the food. All are inspirational to get one cooking cuisine from Mexico.