While Spanish missionaries planted the first orange trees in California in 1769, the oldest orange tree in the state resides in Oroville. She arrived in the state as a sapling from Mazatlan, Mexico, in the 1850s.

Known as Mother Orange Tree, she is a California Historical Landmark. 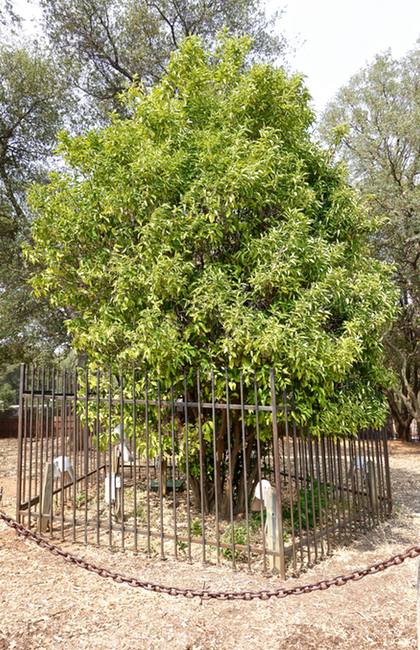 The oldest orange tree in California is in Oroville. (Image: Kathryn Reed)

She has been moved a few times, has survived floods and freezes, and been nursed back to health. A nearby sign says, “Today, with the help of a greenhouse, warming lamps and water mister, the Mother Orange Tree continues to thrive and remains a beloved symbol of the Golden State.”

Those accessories were not visible on a recent visit. Nonetheless, Mother Orange Tree looks healthy, with lush green leaves covering her multitude of branches. Today her fruit is not for picking, but oranges that fall to the ground are fair game.

Information at the site says, “Imported from Mazatlan, Mexico, the Mother Orange Tree was purchased on the streets of Sacramento when it was only a 2 to 3-year-old seedling in a tub. She was planted in 1856 and quickly grew into a California legend. Early-day miners traveled from far and wide to eat her sweet oranges, gather the seeds, and plant them in the yards of their homes.”

Her “children” are scattered about the North State. 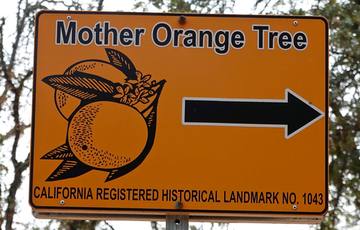 It was Judge Joseph Lewis who brought the tree from Sacramento to Butte County. He planted the tree near the toll bridge at Bidwell’s Bar in 1856. Mother Orange was relocated in 1964 so she wouldn’t be drowned with the building of Oroville Dam.

Today, she resides at the entrance to the California State Parks office in Oroville. A fence around her keeps people ample distance away, but doesn’t distract from taking a good look at this specimen of citrus lore.

From such humble beginnings, oranges are now big business in California. According to the U.S. Department of Agriculture, 2021 will be the first time the state has surpassed Florida in orange production.

Oranges also continue to thrive in Mexico. It’s the No. 1 citrus crop in terms of acreage planted. About 50 percent of the trees can be found in the state of Veracruz on the mainland.

The USDA reports, “Mexico imports oranges from only the United States. These are mostly for consumption in the border regions. Mexico has a price-sensitive fruit market. Prices of imported American oranges are high compared to domestic prices. Most of the imported oranges are sold along the border or in high-end supermarkets.”