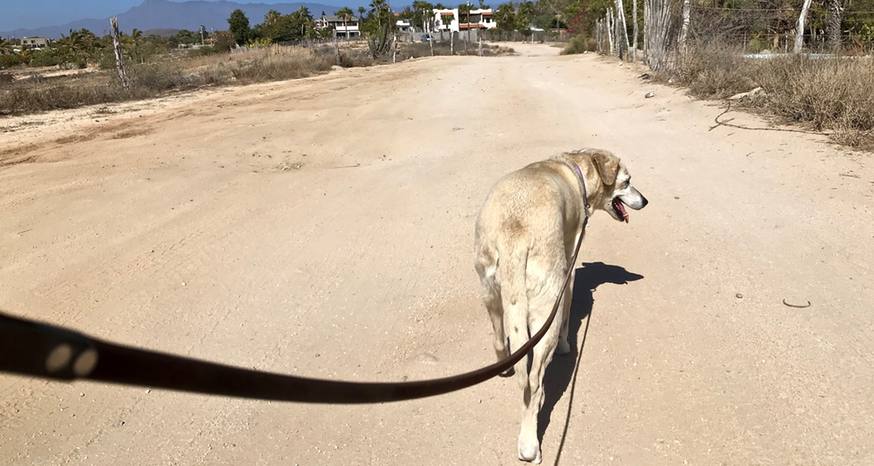 AJ on day 10 post-attack takes the lead on the walk. (Image: Kathryn Reed)

It’s been an interesting two weeks since AJ and I were attacked while walking in our Todos Santos neighborhood.

First, we are physically fine. A few scars on our bodies. Those will fade faster than our wounded psyches. Still, we are moving on in a positive manner.

Fear gripped me the first week. AJ, too.

She had never been bothered by barking dogs; just ignored them, slept through the noise. The first couple of nights after the incident she lifted her head at the onset of barking. I petted her and talked to her in a calm voice. I wish I could promise nothing like that Sunday would ever happen again. She’s better now.

Jill invited me to her neighborhood to walk AJ with her, Ruby and Pepper. It was good for all of us. Still, it was sad to see AJ not engage with her four-legged buddies. She kept her tail tucked in. I would too with two bite marks on it. She was stoic.

Finally, on the third walk with Jill and her dogs (which was day nine after the attack), AJ gave Ruby a tail wag. She even had more energy.

We didn’t go on a walk in our neighborhood for a week. The first one was under the lead of Andy and Blossom, two-legged and four-legged neighbors/friends. This is just what I needed. An escort to help build my confidence. Andy pointed out who lived where. I learned more about the dogs than the people, which is exactly what I needed.

The day before that excursion I put AJ on the leash to walk around the yard. I was being lazy; I didn’t want to drive to walk. We made it around twice, then she led me up the front steps. Clearly, she is in control. Guess we won’t be doing that again.

She doesn’t chase balls, so she needs to walk for exercise.

Our first walk on the beach came two days after the attack. We were headed to the fresh water lagoon where she likes to drink and wade. Usually she is off leash, but I kept her on it because I wanted her next me and I didn’t want her to get sand in her wounds.

I turned around when I heard voices behind us. Joggers were yelling to their dogs to come back, which they did. I felt paralyzed seeing those dogs. Now I know how someone must have felt when AJ ran at them and I would yell, “She is friendly.” What a selfish ass I was. It doesn’t matter that I have a friendly dog. I don’t know someone else’s story. And I didn’t have her under voice control.

I digress. I learn.

I just started crying on the beach, balling my eyes out as I hugged on AJ, telling her I would do anything to protect her. I needed that emotional outlet; it was my first cry about this whole ordeal.

It was hard to come to grips with the knowledge I could not save AJ on my own. A friend, though, convinced me I actually saved AJ’s life by whatever it is I did. Maybe it was the screaming to get someone to come to our aid. Maybe it was being there the whole time and not running for help. Maybe it was getting her medical care.

On day 10 post-trauma we ventured out in the neighborhood on our own. Little dogs came running at us with no repercussions. A puppy rolled over, all submissive. This was the first time AJ walked in front me. It means things are getting back to normal for us.

A new normal is that pepper spray is in my non-leash hand now. I was reluctant to embrace this new reality. I thought it would mean I was caving into something. Apparently it was pride and ego that were getting in the way. Help can come in many forms; even a weapon of sorts.

Hearing from so many people about their horrific experiences with malicious dogs – and many much worse than mine – made me realize how lucky we were and are. It also made me understand how carrying something to ward off danger is more common than I realized.

Intellectually, I know there are aggressive dogs everywhere. I just didn’t know I knew so many people who had such horrible experiences. While it was sad to hear these stories, they also brought comfort. With time, they were able to heal. I need more time.

My faith in the cops doing anything is pretty much nil. The initial report, such as it was, was handwritten on scratch paper by a woman at the state police office. I took in the medical report and receipts the following day, per her request, and she seemed a bit flummoxed before recalling my story. She said she didn’t know how long the investigation would take. I said I just wanted to know if the dog had been vaccinated. I knew I would never be reimbursed for medical expenses or that nothing would happen to the dog or owners. To this day I haven’t heard one word from the cops. Now it doesn’t matter.

Wonderful news came eight days after the attack. My neighbor Tim went to talk to the owner. That guy didn’t know about the incident; it was his son-in-law who had come to our aid. Their dog was vaccinated against rabies. What a relief.

While people have told me the owners of the vicious dog are really nice, I still don’t understand how someone keeps a dog chained up and in a cage for any part of the day. I still believe in bad dog owners, not bad dogs (99 percent of the time).

Mexico is a country that is very much based on machismo. It carries over to how they treat their dogs. Don’t get them fixed, keep them aggressive. This is changing, at least in Todos Santos. More are showing up at the spay and neuter clinics. Fewer dogs are treated like the one who attacked us. Still, there is a long way to go to educate people about animal abuse.

AJ and I will be fine. That’s the important thing. She is playing with her monkey, and “wrestling” with me a bit – wonderful indicators that she is back to her normal self. And while she has always been a momma’s girl, sticking close to me, she is even closer now. Or maybe I’m staying closer to her.

Thank you to everyone who helped us with this ordeal and has checked in on us.