Trash is a complex issue in Mexico 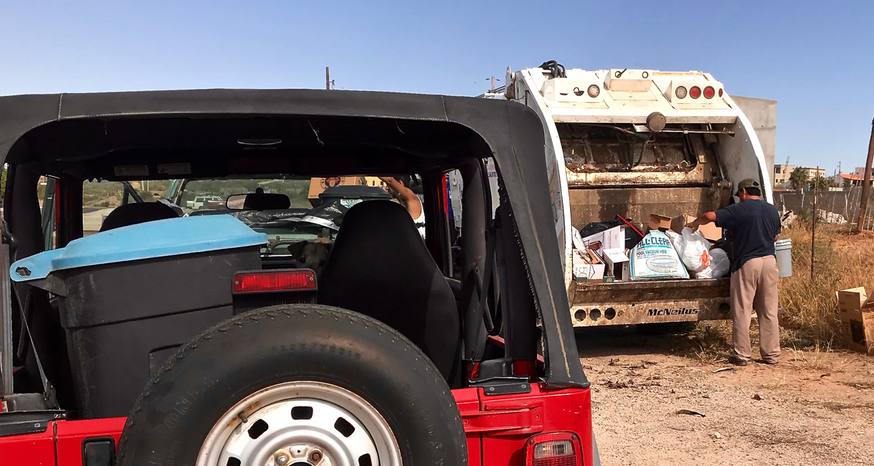 For people without curbside trash service in Todos Santos there is the city garbage truck on the north side of town. (Image: Kathryn Reed)

Puffs of smoke fill the air – there goes someone’s garbage. A stench fills the air – garbage. Scattered along the road – garbage.

It doesn’t matter that there is garbage service in Todos Santos, some people want to dispose of trash in their own way, which means it doesn’t end up at the town’s dump. Even if it did, that doesn’t mean it would be disposed of in a more environmentally friendly manner.

The dump is on the outskirts of town. One early morning as I was headed to San Jose del Cabo I was able to smell and see firsthand how when the dump burns the trash the smoke drifts to the San Pedrito and Pescadero areas. This nasty smelling plume hung in the air, drifting toward the coast. It was such a contradiction to what otherwise is a pretty section of highway.

There’s a difference between a dump and landfill. In the United States landfills have liners as a way to prevent toxins from leaching into the soil and reaching the aquifer, and they have soil put on them daily as a way to help with the smell and prevent critters from taking over. Open dumps are no longer legal in the United States. They are deemed an environmental hazard.

Mexico is a Third World country. That’s not to say anything goes, but sometimes it seems like it.

While burning trash, be it at the dump or by individuals, is polluting the area with poison, the garbage on the side of the road seems worse in so many ways. It’s more than being an eyesore. It gets into waterways, the soil. Wild and domesticated animals eat it.

I pick some of it up on my street, but I know I could and should do more. Instead of just poop bags on walks with AJ, I should be taking something larger to clean up more. I need to be a bigger part of the solution.

There is garbage pickup in Todos Santos, just not for everyone. Those who live on streets with weekly service don’t have to pay for it. Others can pay for private service for as little as $5 a week.

I’m on a street without city garbage service. Many of the streets in Todos Santos are like mine – dirt. Still, plenty of them are getting serviced by weekly trash pickup. My street is so uneven I would hate to see the truck come down it. One of the perpendicular streets is narrow, and full of divots that 4-wheel drive is almost needed. No way to have a garbage truck come down here and get out.

I put the can in the back of the Jeep most Saturdays, drive a mile or so, and the workers dump it into the city garbage truck. Three men are often working at the truck that is parked out in the Las Tunas area, which is on the other side of downtown in gringo land. It’s free. These guys work for tips, so I hand them a propina based on how heavy it is or if there is more than the one can. My neighbor suggested 30 pesos, or about $1.50, so that’s what I start with.

I’ve been perplexed when I’ve seen the guys sifting through the garbage and pulling out aluminum cans. Yes, there is a separate recycling center in town. The difference here compared to anyplace I’ve lived in the United States is that instead of receiving money for turning in recyclables, here you have to pay to recycle.

With the minimum wage in Mexico being about $5 a day – not hour – you know the locals are not paying to recycle or to pay someone to take their trash. That’s why expats need to do more than their share when it comes to dealing with trash issues here, and presumably throughout Mexico.