At 150-Years-Old, Chico Continues To Grow

Each day it seems like another vacant parcel in Chico is being turned into a construction site for homes or commercial development.

In the short time I’ve been here (going on 18 months) the growth has been amazing. Coming from Tahoe where new construction was limited, I’m just not used to this. From what I see being built near my end of town (the southeast) it doesn’t seem like city staff or electeds put a lot of thought into what got approved. The roads were not designed to handle the density of housing and commercial enterprises being built.

We all know water is a precious resource. At least most of the landscaping does not include grass. 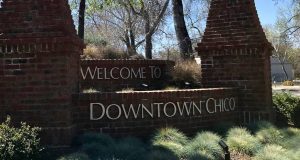 While I’m a newbie to Chico, I have been coming here since 1974 when my oldest sister started college at Chico State University. She returned more than 30 years ago and started a family here, so I’ve been coming nearly every year before I moved here. She’s in a more established area of town so I didn’t see the growth as a visitor.

I know we need more housing. We are an example of a city with a homeless problem gone wrong—though it’s gradually being addressed thanks to lawsuits, judges and people who care.

Chico had a population of 101,475 as of the 2020 Census. It’s been on a steady growth pattern, with the largest influx coming after the 2018 Camp Fire that wiped out the town of Paradise. Those people needed somewhere to land; Chico was it and many have never left.

One of the best things about Chico is the university, which brings an energy to the area—especially since it is right downtown. All of those red brick buildings, many dating to 1887 when the college first opened as the Northern Branch of the State Normal School, gives it a bit of an East Coast feel. Or maybe brick just makes me think of the East.

Hopefully, when the city celebrates its next milestone all of the land will not have been completely paved over. After all, it is known as The City of Trees.