Tell me granite can’t burn and I’ll show you the remnants of the Caldor Fire.

So many people, people much more knowledgeable about fire than me, had said the granite in the Sierra Nevada mountains would act as a natural fire break.

They were wrong. So, very wrong. 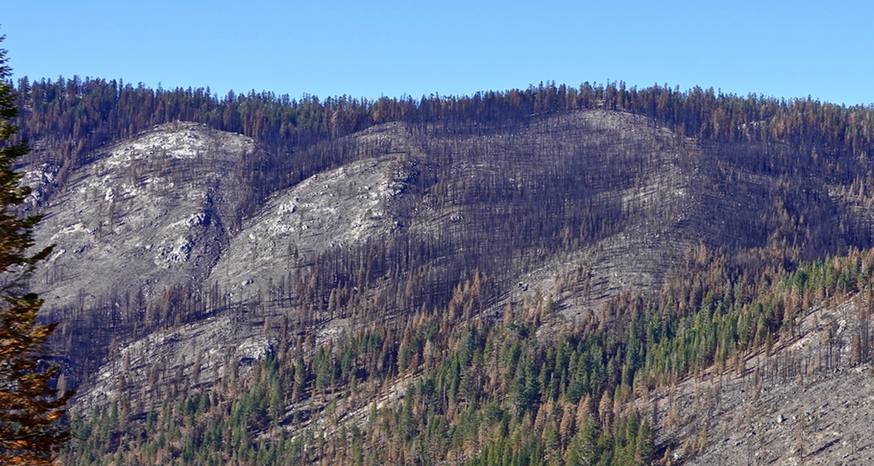 It was the second fire in history to cross the Sierra Nevada range. It did so Aug. 30. The first time this occurred was just days earlier, on Aug. 18, when the Dixie Fire that wiped out half of Lassen Volcanic National Park crested the Sierra.

It is startling to see areas along Highway 50 where the land and rocks are black. While granite is one of the hardest rocks on the planet and can’t actually burn, it is not immune to being scarred by the wrath of a wildfire. 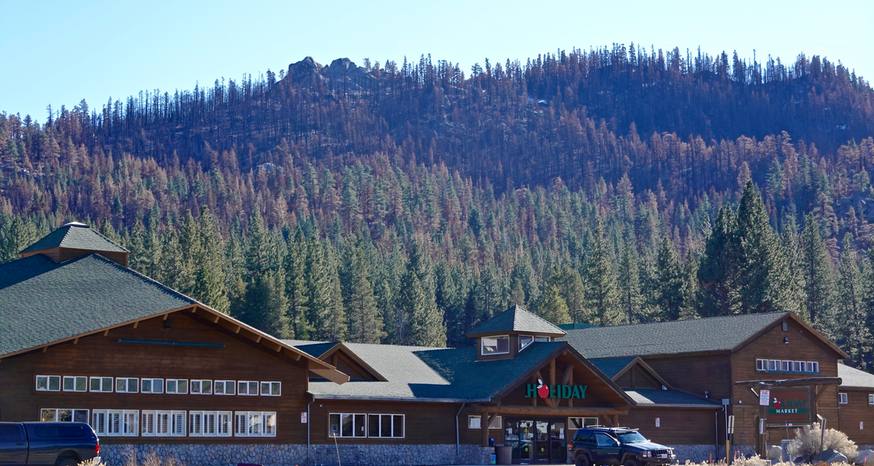 The trees behind Holiday Market in Meyers are now blackened. (Image: Kathryn Reed)

In Meyers the fire’s path is easy to see. The same is not true from the heart of South Lake Tahoe. Behind the Holiday Market (the former Lira’s) the hillside is more black than green.

So many hiking/biking trails will be forever changed. Yet, at the same time, Tahoe Rim Trail Association and TAMBA officials have been assessing their assets, and are eager to make them accessible again. As with any destruction that includes the loss of vegetation and infrastructure, rebuilding, regeneration and renewal are immediate as well as time consuming. Dealing with the aftermath of the Caldor Fire will be no different. 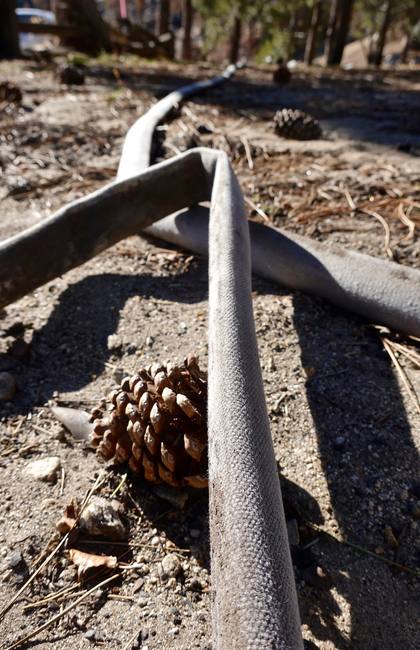 In the end, the Caldor Fire consumed 221,835 acres. Only a fraction of that was in the Lake Tahoe Basin—9,885 acres. Of those, the soil burn severity in the basin was categorized as: 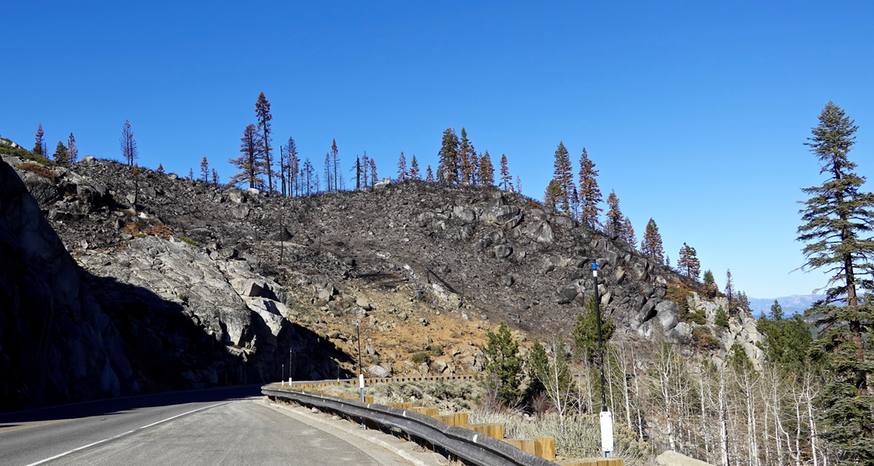 A few chimneys are visible when driving, but nothing to the extent that was first described by some news outlets. That doesn’t make the loss of someone’s home any less sad or the experience any less harrowing just because I could not see the damage.

Most of the houses reduced to ash were farther off the main highway. The fire destroyed 1,003 structures, and damaged another 81.

An army of firefighters, winds blowing in the correct direction and a bit of luck prevented the Tahoe basin from losing any structures. 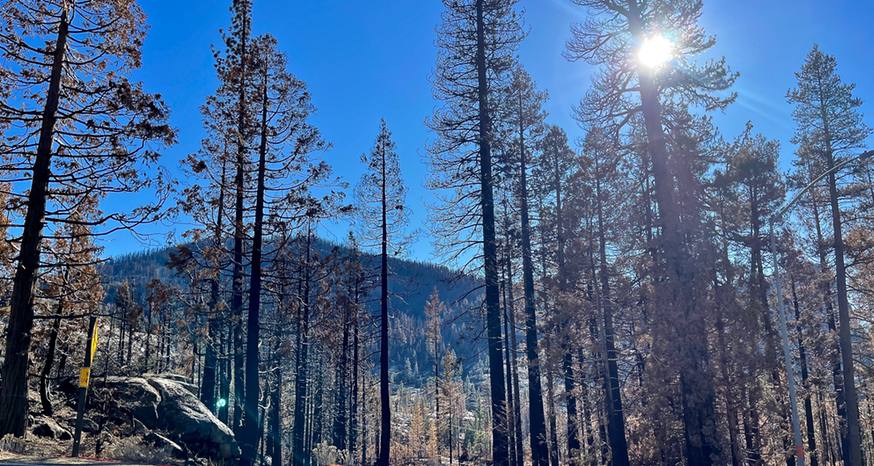 The sun is a reminder life goes on after a fire. (Image: Kathryn Reed)

Five people were injured in the fire that started Aug. 14. No cause has been released. It was fully contained Oct. 21. The Caldor Fire got its name from the old logging town of the same name and a road with that name.

Lookie loos are not allowed at Sierra-at-Tahoe. Only those with a delivery or an appointment are allowed to drive up the road to the ski resort. Too much damage to the ski area’s infrastructure and precarious trees are preventing it from opening in 2021, but officials aren’t ready to write-off off this entire season.

In so many locations stacks of trees are piled not far off the highway, looking as though the forest had been clear cut. Perhaps they can be salvaged and turned into something other than mulch. 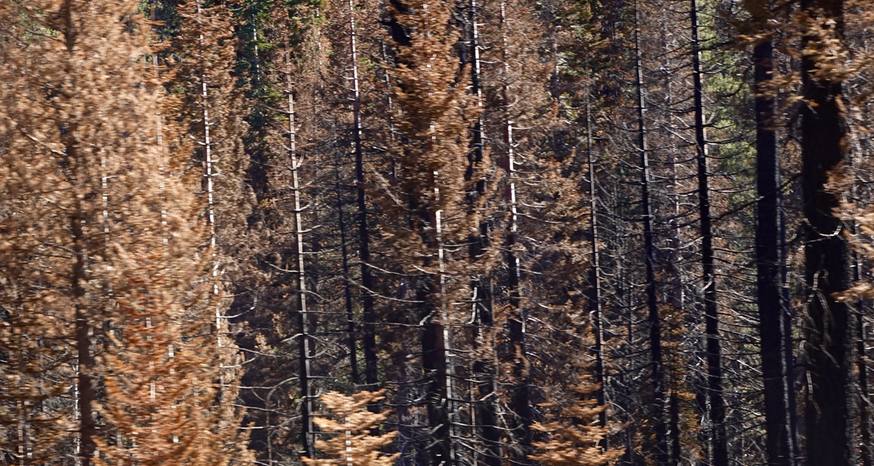 At the Mount Ralston trailhead on Highway 50 the devastation is immediate for hikers. About 100 feet from the parking area numerous granite boulders are now black instead of gray.

Traffic is slow going through American River Canyon, at least it was on the Tuesday afternoon before Thanksgiving. It’s one-way in multiple locations. In some ways it felt like a funeral procession. I was mourning the loss of the forest, the destroyed habitat, the demolished homes, the lives forever changed. Vehicles were not passing each other even when they could. Most of us drove below the posted speed limit. This pace allowed for reflection, sorrow and tears.