Feeling safer on dog walks north of the border 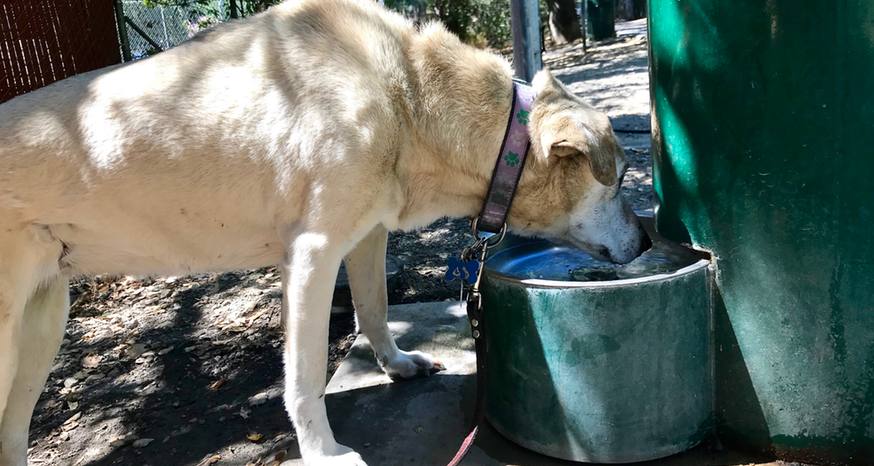 AJ drinks from a water fountain for dogs along the creek trail in Los Gatos, California. (Image: Kathryn Reed)

Fresh mountain air. AJ seems to be thriving in it.

It’s been a month since we have been back in California. This was AJ’s first time to the States in about 10 months.

I had a vet appointment lined up before we left Mexico. I wanted blood work done to see how things were going with her kidney disease. Plus, I wanted her checked out by a doc who knew her history.

There have been a few lingering concerns since we were attacked by a dog in May while walking in Todos Santos. AJ has been slower – even considering her advancing age of 16. She sauntered behind me more than she did in front of me. Her back legs have been weakening for a while, but post-attack the right one appeared to have a kink in it, so to speak, until she would work it out along the walk. With her being part Lab, I was wondering if she might be having some hip issues that are common to that breed.

Dr. Laura Doering at Alpine Animal Hospital in South Lake Tahoe has known AJ longer than I have. The vet felt along AJ’s spine. This normally stoic dog winced without much pressure. X-rays were ordered. She has bone spurs and has some other issues, while the hips are fine.

The doctor said this could easily have been from when the vicious dog yanked on AJ’s tail. Those two puncture wounds are still slightly visible as the hair has not quite covered them completely.

I had mostly been massaging around her neck area, where she had a couple bites. AJ seemed to melt with the touch more than she used to. Now when I touch her back I can feel the heat when the area is inflamed. She doesn’t complain, though. More massage.

This week she will be starting on pain meds. No reason for her to be uncomfortable. I asked the vet’s office about CBD. They won’t recommend it based on not enough studies. Because AJ has kidney disease I don’t want to give her something that would cause a negative reaction. That’s why I’m opting for the traditional drugs.

As for the owners of the malicious Baja canine who attacked us and the dog, nothing was ever done. The police never followed up with me. It’s Mexico. Things will eventually change, but it won’t be fast enough for me.

I can’t even explain the joy it brings me to not be scared to walk AJ in Tahoe and elsewhere. I don’t carry pepper spray here like I started to do in Baja post-attack.

I’m sure AJ could feel the fear I had while we were there. I flinched at the sight of other dogs off leash. (This was post-attack.) If it weren’t for my friend Jill, I’m not sure what I would have done. I miss walking with her, Ruby and Pepper. When AJ and I return we will be walking with them again. I’m not sure if my comfort level will increase when I’m back in Baja. I know the pepper spray will return. I doubt we’ll ever walk in my neighborhood again.

For now, though, AJ is thriving. For me, well, my hand that got bit is OK. I have scars. Maybe they’ll fade away. Some pain lingers; usually when carrying things. Unfortunately, tennis brings on the most discomfort.

We were lucky – it could have been much worse. We have and will keep adapting in order to continue enjoying the great outdoors no matter where we are.