Appreciating a motor while peddaling 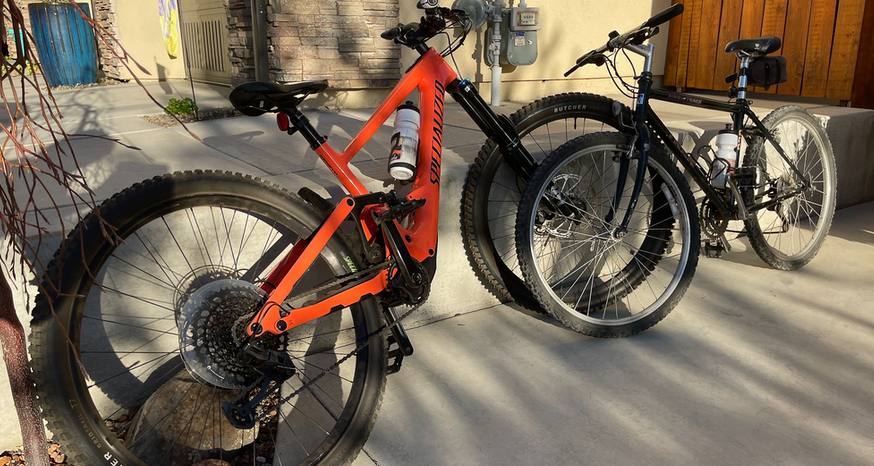 The new and the old mountain bikes. (Image: Kathryn Reed)

My old baby has a new home and I have a new baby.

After a quarter of a century, I said goodbye to the first mountain bike I owned. She served me well. She was a Trek hardtail that I bought when I lived in Las Vegas in the mid-1990s. I rode her everywhere, really treating her more like a road bike than a mountain bike until I moved to Tahoe in 2002. Even when I lived in Sonoma County it was the paved country roads where I mostly pedaled.

Most likely she is being ridden by a Chico State student. I donated her to last week’s Fall Bike Auction hosted by the Associated Students.

“I would say that 90 percent of the buyers at our on-campus auction are students. The other 10 percent are either faculty, staff or general public. So, while it is very likely that a student would end up with your bike, I cannot guarantee it,” Curtis Sicheneder, Chico State Associated Students associate executive director, said.

It feels good knowing there’s a little life left in her. Even better is that any money Associated Students makes at the auction helps students.

I knew my bike had outlived my purposes long before I took a clinic last year and the instructor told me it was time for a new bike. 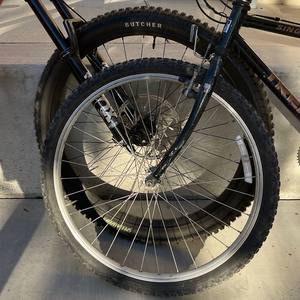 The new bike has much bigger wheels than the old one. (Image: Kathryn Reed)

In the last year I’ve been contemplating what to buy, if anything. Could my road bike (which is also old, but not quite vintage) be enough? Do I spring for an ebike? Then I had to think about how much I ride and how much more I might ride with something new.

What pushed me over the edge to get an ebike was my trip to southern Utah in early October where I borrowed a friend’s bike.  Oh, my, what a difference it was to be on an ebike.

I came home with an ebike. I couldn’t pass up the sale. It was another one of those times to just say “yes.”

Most everyone says the downside to ebikes is how heavy they are. I’m not sure there is much weight difference between my ancient ride and the shiny new one. Mine does weigh less than my friends’ because I got a smaller battery.

I noticed the difference on the ride Becky and I took in Tahoe, but for my purposes it’s going to be just fine. I’m at a lower elevation and on a normal basis won’t be riding in Tahoe.

The bike is perfect for climbing up and over the basalt of Upper Bidwell Park and taking me around town.

I still have to pedal. I’m getting a workout. I can even turn the battery off if I were so inclined.

What the ebike lets me do is go farther, longer and with a little less oomph. It really is amazing that with a push of a button hills seem less daunting, as do rocks.

My Specialized is a Type 1 ebike (there are three types), which means for the motor to work I also have to be working, as in I have to pedal.

As WheelWorld.com describes it, “It feels like you have the best tailwind of your life on a permanent basis.”