Cycling around Tahoe without cars could be reality in 25 years

A bike trail going all the way around Lake Tahoe inches closer to reality each building season. To date 33 miles of the Tahoe Trail are in the ground, with full build out of the 72-mile route expected in 2045.

Also to be completed in the next 25 years is the South Tahoe Greenway Trail that will go from Meyers to Kingsbury Grade. 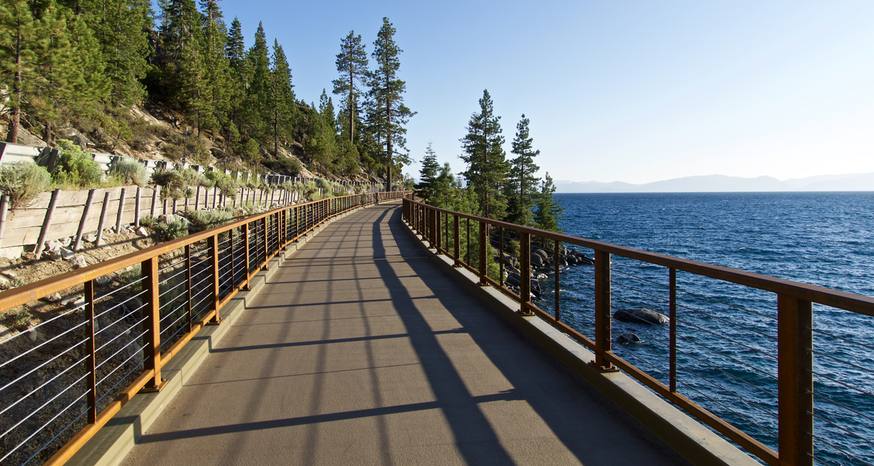 These trails and the many others in the basin are part of the greater Transportation Regional Plan that the Tahoe Regional Planning Agency develops. The plan is updated every four years, with the last one completed in 2017. Planners look out 25 years at a time. The focus is on trails, transit, technology and communities. TRPA is hosting webinars every Monday on the four components of the overall plan; the first one was April 20.

Kira Smith, associate transportation planner for TRPA, on that Monday took listeners on an overview of what the agency and partners are planning for the next couple of decades. These trails are for all non-motorized users, not just cyclists.

To know if the infrastructure is actually being used counters have been installed in most trails in the last several years. During the weeks of July 8 to Sept. 4 15 percent more people used bike paths and sidewalks in 2019 compared to the same period in 2018.

“On many of these trials we see daily counts of 1,000 or more users. And in certain locations we even see 2,000 daily users,” Smith said.

El Dorado County this summer intends to complete a segment of the South Tahoe Greenway from Bijou to Sierra Tract.

By 2025, the next 8-mile segment of the Tahoe Trail from Sand Harbor to Spooner should be done. (This trail on the Nevada side was once known as the Stateline to Stateline Trail because it will connect all of the Silver State to both California state lines. It is now part of the larger Tahoe Trail.)

By 2035, people should be able to cycle from Baldwin Beach on the South Shore to Meeks Bay on the West Shore. The plan should be done this summer, according to Smith, as various parties look at the Highway 89 Corridor Plan. After that a feasibility study will be conducted to look at alignment alternatives. Smith called this a tricky segment, but critical gap closure. It’s part of the greater Tahoe Trail going around the lake.

Something that wasn’t an issue in the last transportation plan was electric bikes and scooters, as well as bike share programs. This plan will look at where these tools are allowed and where they shouldn’t be. This is a conversation being had with land owners in the basin. Also being looked at is how these devices are changing how people get around. From May to November 2019 there were more than 215,000 scooter trips in the basin. Lime Bikes debuted in South Lake Tahoe in summer 2017.

“This industry has rapidly evolved. It is changing nearly everything we knew about movement and mobility,” Smith said.

More information about the Transportation Regional Plan is available online. Under the “get involved” tab is a link to register for future webinars or to watch ones that have taken place.

The price of gasoline is dropping like a rock. Chicken wings are suddenly a bargain. And retailers drowning in excess inventory are looking to make a deal.

After more than a year of high inflation, many consumers are finally starting to catch a break.
https://wapo.st/3VOrKrD