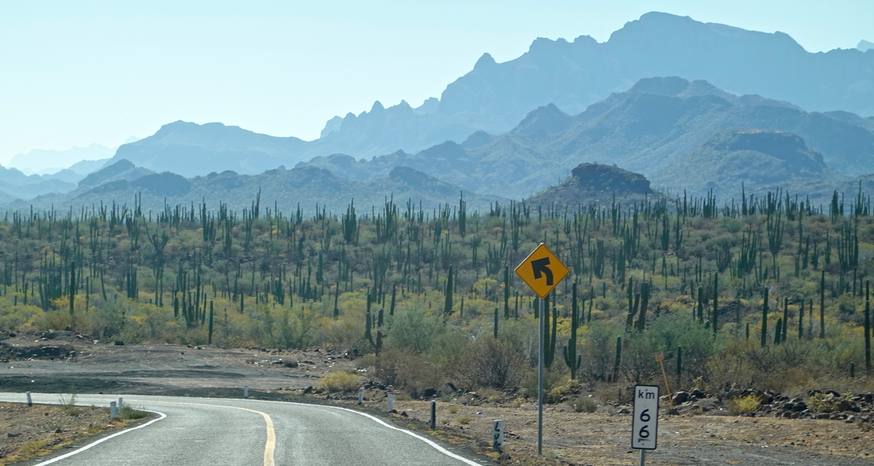 The Baja peninsula is a mix of desert and mountains–sometimes at the same time. (Image: Kathryn Reed)

It’s called a highway, but by many standards it is a merely a two-lane road. However, for those who remember when it was all dirt, this stretch of asphalt is like pavement heaven.

The 1,711-kilometer or 1,063-mile long Carretera Transpeninsular (Transpeninsula Highway) was finished in 1973. It stretches from the north in Tijuana (the busiest border in the world) to Cabo San Lucas in the south (the tip of the peninsula). It weaves across Baja California, with views of the Pacific Ocean and Sea of Cortez as it crosses the desert and goes through mountains. (The peninsula is 40 to 240 kilometers wide in places, or 25 to 150 miles.) 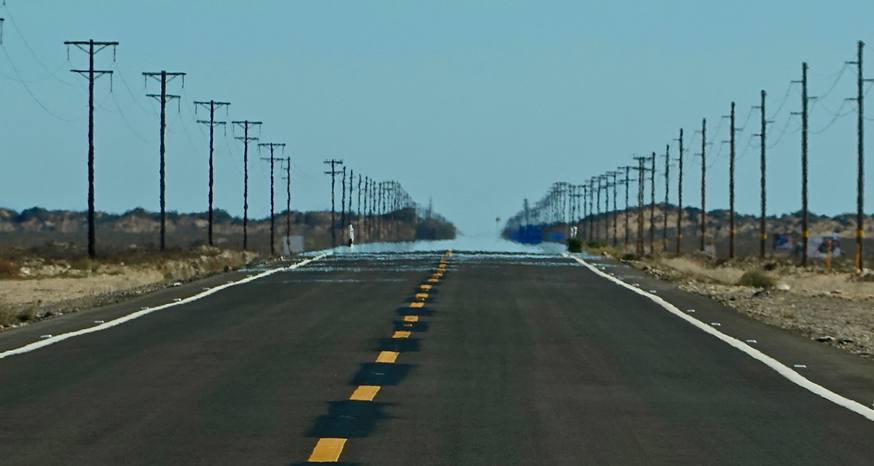 At times Highway 1 goes on forever without a curve or another vehicle to be seen. (Image: Kathryn Reed)

People have been traveling the length of Baja for centuries, whether it was on foot, by animal or a sturdy vehicle. Part of it is the original camino real built by the Spanish to link their missions.

Before the asphalt was laid much of it was one lane of dirt. The highway at times covers that original road and in other locations was laid nearby or farther away for stability reasons or to avoid flooding. 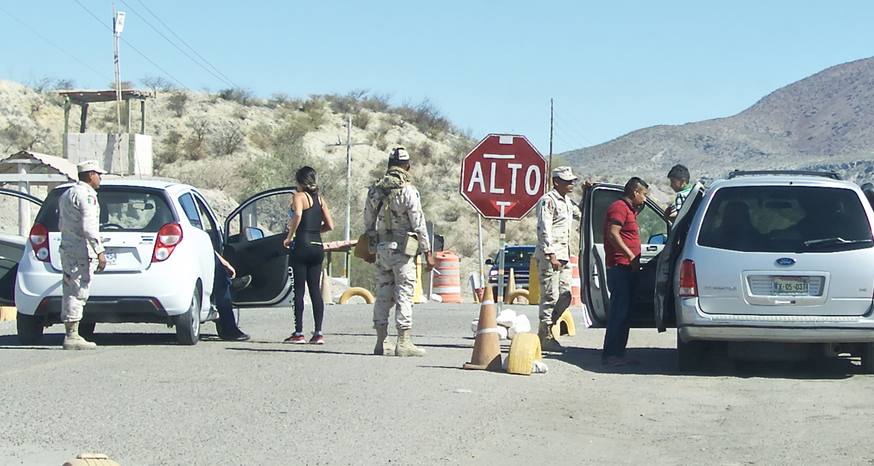 Today the road allows for easier access for tourists via vehicle to this swath of Mexico. Plenty of hotels cater to travelers from the United States and Canada, as do restaurants. Like anywhere, though, some of the best food is found where the locals go. Don’t judge a dining establishment by what it looks like.

The highway has also opened up commerce. This can be a good thing for stores and consumers. While plenty of goods are still brought in via ferry from the mainland, the distribution by truck is now easier. 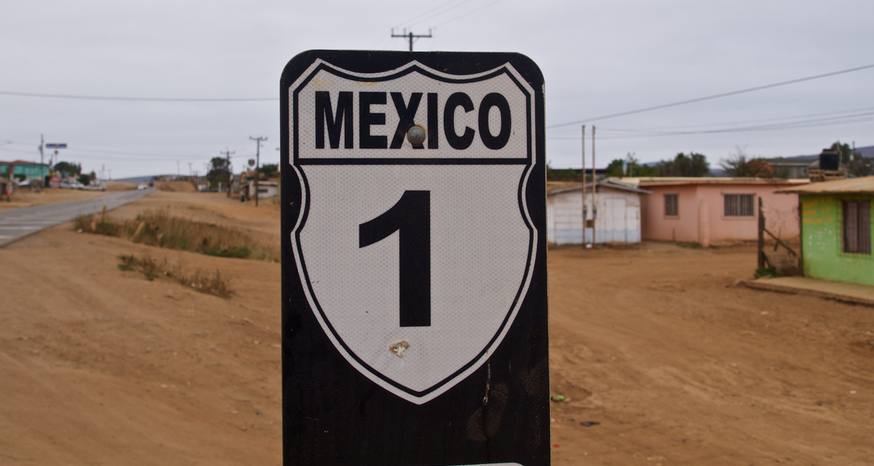 One problem with that is all the 18-wheelers on the road. This highway is not wide like most built in the United States. A truck roaring by in the opposite direction will shake even a fully loaded vehicle. Those drivers are going fast, not abiding by the speed limit. They are also prone to passing those in front of them who are going too slow by their standards.

While it’s possible to go 65 mph in some locations, the speed limit is often much less. Often times the posted speed limit is 80 kilometers per hour, which is 50 miles per hour. The maximum posted on Highway 1 is 120 kph, or 75 mph. 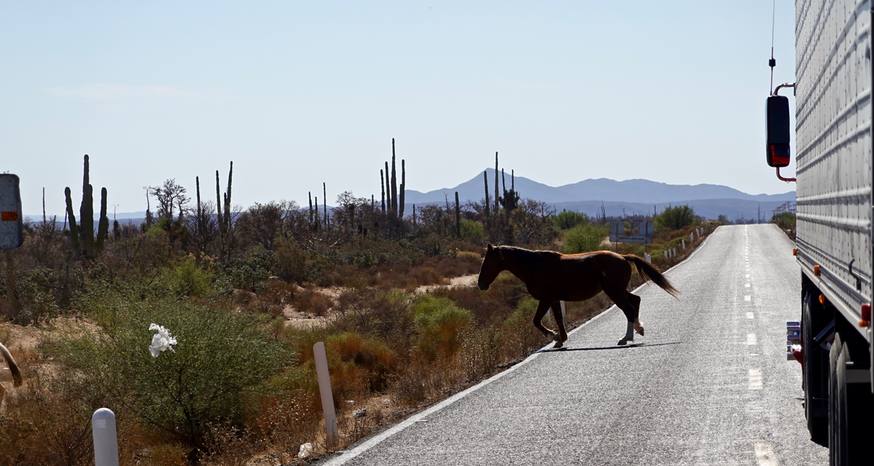 Animals and trucks are two moving entities to always be wary of as a driver. (Image: Kathryn Reed)

Some sections of the road are better than others. Potholes are a problem if it’s rained a lot. This adds to the time it takes to travel. Road construction seems to be constant, which also adds to time getting from Point A to Point B. Sometimes when a section has been washed out the detour is through dirt. Facebook even has a page dedicated to Baja road conditions.

Animals on the road is another concern, as well as vehicles without proper working parts—like brake lights. 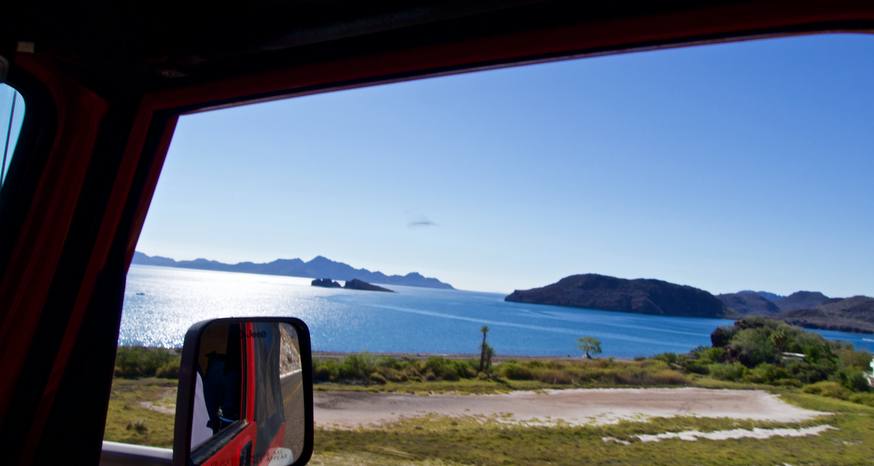 The Sea of Cortez is picturesque even while whizzing by. (Image: Kathryn Reed)

Gas usually is not a problem to find, but there are times when stations don’t have any. This is why the rule of thumb is to fill up when possible. One particular stretch of Highway 1 doesn’t have any stations, but entrepreneurs sell it out of containers along the side of the road. This liquid has a premium price, but at least you keep moving.

When it comes to the built environment, Highway 1 boasts a few major cities along the route, but is mostly small towns or lonesome looking taco stands. It’s the natural surroundings what will make one pull over for various photo ops. To the west is the anything but tranquil Pacific Ocean, while the east boasts the more placid and turquoise Sea of Cortez. 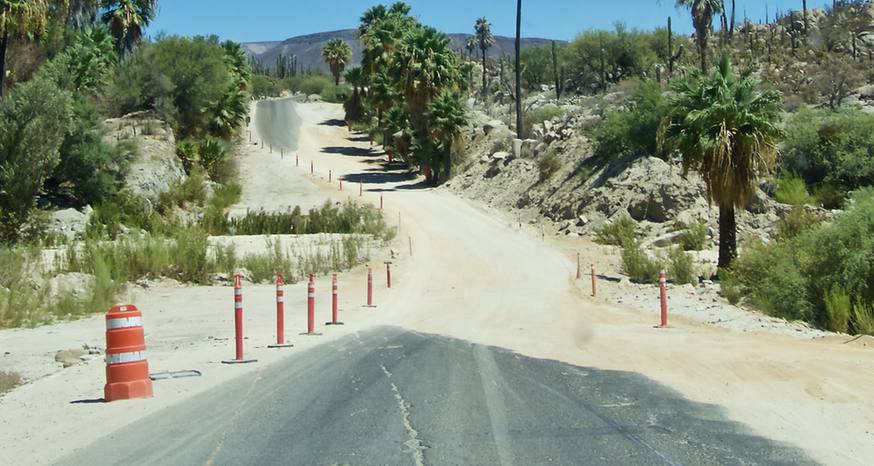 Fertile farmland is scattered throughout. Depending on the growing season it’s possible to buy produce along the highway without going into a store. Wineries can also be found on this stretch of road in the north.

The desert offers an array of flora. From the Dr. Seuss like bajooms to the federally protected cardón cactus. While much of the terrain is desert, mountains are visible in so many locations. Las Tres Vírgenes volcanoes, which were last active in 1746, are a distinct landmark at 6,548 feet or 1,996 meters.

There is plenty to be enamored by, with a plethora of possible side trips and things to see and do along the way. Take your time, it’s a highway to paradise.