Dog walks double as opportunity to rid beach of trash

Scanning the beach, it looks pristine for miles. Looking down, that’s another story.

While the beaches of Todos Santos are not full of litter, there is something to be picked up along each walk. This could probably be said of any sandy oasis in the world. People leave things behind – sometimes deliberately, other times unknowingly. Debris gets washed ashore during a storm or with the normal ebb and flow of tides, while other particles are brought to the beach during rain events from higher land points. 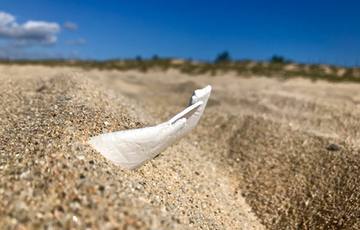 Wind covers and uncovers items, so walking the same stretch each day can reveal something new. AJ and I walk a similar section on a regular basis, but it would be near impossible to walk the exact path because the beach is so wide and long.

It used to be when I had an unused poop bag after walking, I would bring it the next time. Now I use it for trash.

I have Jill to thank for this. AJ and I regularly walk with her and canines Ruby and Pepper. She has been picking up trash for a handful of years; starting after a neighbor she used to walk with was doing so. Jill and I share a bag, thus cutting down on the number of plastic bags when we walk together.

Styrofoam is Jill’s biggest pet-peeve. She has a knack for spotting tiny pieces of this non-biodegradable material. I confuse them for shells. Some of it is from cups, other is the tiny beaded Styrofoam used in insulation. Recently she found a syringe on the beach. My most interesting item was a pair of rusty pliers next to a barbed wire fence; guessing someone left them behind after the job was done. Mostly pieces of plastic, bottle tops and cigarette butts fill our bags, along with the occasional beer can.

While we are using plastic bags, that isn’t completely terrible. This last summer Baja California Sur outlawed single-use plastic bags at stores. Produce bags are still available. Those often become my dog poop/beach litter bags. I also have biodegradable poop bags I brought from the United States. Jill is even better, bringing bags that rarely see a second use like what dried beans come in. This is where I need a lot of improvement – to reuse my quinoa, trail mix and chip bags. Those bags are also being used to clean up after AJ in the yard. I used to toss them in the garbage without giving them a second life.

Jill isn’t the only walker I know who picks up other people’s garbage. My mom has been doing this for as long as I can remember. She does so when walking her neighborhood, picking up what she can carry. I, too, have picked up trash on any street I’ve lived on.

It proves garbage is an issue everywhere; not just on a beach. “Leave no trace” is a mantra for hikers, as is “carry out what you pack in.” These sentiments should be applied in all circumstances when it comes to trash. One day it would be great if nothing ended up in anyone’s bag because the world was that clean. But statistics make that seem like a fantasy.

According to National Geographic, “There are 5.25 trillion pieces of plastic debris in the ocean. Of that mass, 269,000 tons float on the surface, while some 4 billion plastic microfibers per square kilometer litter the deep sea.”

Human trash is an environmental nightmare – for the land, ocean and animals consuming our crap. It’s bad enough for wildlife to eat human food, even worse to ingest our trash. Think of all the toxins getting into the soil/sand, waterways, animals’ bodies. Plenty of humans are then eating those contaminated animals. The ecosystem can’t survive if we keep trashing it.