Scattering AJ’s ashes in a favorite place in Todos Santos 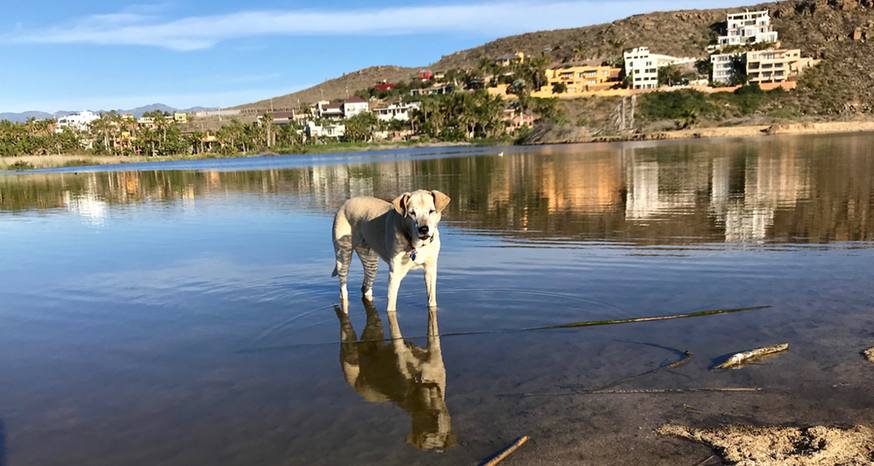 Even though AJ was not a big water dog, she will forever be swimming in La Poza lagoon in Todos Santos. At least that’s how I like to think of it.

I spread some of her ashes in that body of fresh water this month when I was in Mexico.

On that foggy morning I walked purposefully toward the lagoon, but couldn’t get too close. I was pushed back. A strong force said not now. This doesn’t happen to me very often, or maybe I don’t listen or feel as well as I should. This time I did.

OK, AJ, I thought. Let’s just sit and talk. And that’s what we did for well more than an hour. She had always been my confidante. I’d been missing that these last four months. Friends told me she would still listen if I tried to talk to her. I just couldn’t. I was weighed down with a grief I hadn’t felt before, which was only compounded by other things going on in my life.

This particular day, though, was different. While I was in an incredibly sad state of mind, I was also willing to listen to what she had to say. Our talk was long enough for the fog to dissipate and the sun to brighten the day. It was the perfect transformation.

I still cried on the way back to my friends’, but I also felt a shift. Thank you, AJ. 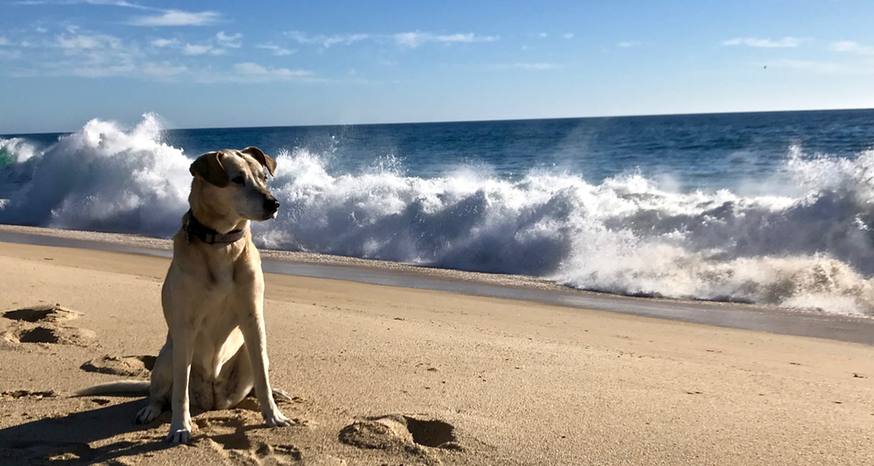 This is about as close as AJ ever wanted to get to the ocean in Mexico. (Image: Kathryn Reed)

Going to the lagoon was our go-to walk for the first two winters we spent south of the border. We’d drive to the beach, then head south to the lagoon. It was the only fresh water for her to wade in and drink in the area.

Most days it was just us on the beach. Often we would sit and stare at the ocean after she had her romp in the calm lagoon. There’s something about a large body of water that grounds me. It took AJ to remind me to seek out what I need to feel balanced.

AJ’s happy place was a trail—the forest or the desert.

You knew she wasn’t a native of Baja because she would not take a swig of ocean water. In fact, she stayed as far from it as possible. In California she had tasted the salt water of the Pacific and never needed to try it again.

Waves were also never her thing. Another reason to stay out of the ocean. She wouldn’t even go near Lake Tahoe when the water was rough.

I wonder what she would have been like had she come to Baja in her prime, when she was faster, full of energy and feistier. Would she have made friends with the street dogs? She was their size after all.

While the worst experience I ever had with her was in Todos Santos—when we were attacked by another dog—Baja was special for both of us and continues to be for me. She made the trip with me in the Jeep each of the three times I drove to Baja and back to California. It’s hard to imagine making that drive without her, and, yet, I can see myself on another extended stay in the distant future.

While she obviously won’t be on that next road trip, it is comforting to know she will always be part of Todos Santos.