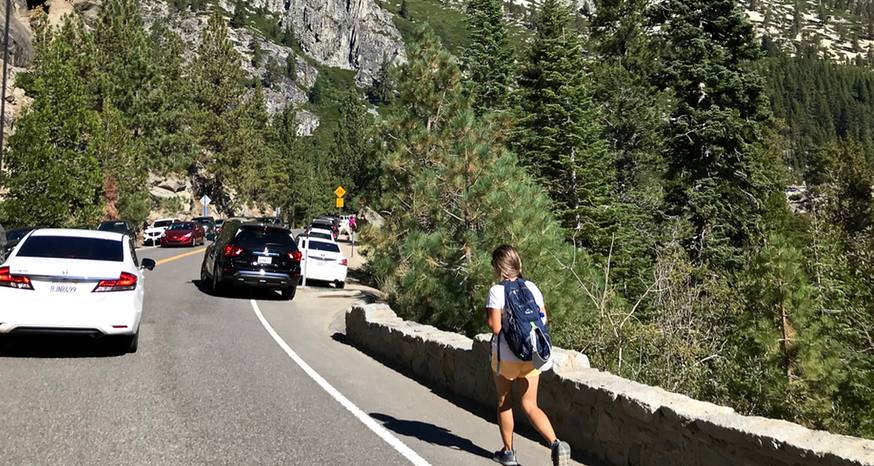 Congestion near Emerald Bay is a problem local agencies are trying to fix. (Image: Kathryn Reed)

Each year it gets more treacherous to go to Emerald Bay via the highway. People are parked where signs say that activity is prohibited. Pedestrians walk on the asphalt, which is a state highway. There is no real bike lane, yet people pedal there regularly.

For what is called one of the most photographed areas in the world, in many ways Emerald Bay is no longer an inviting place to visit.

The Tahoe Regional Planning Agency for the last two years has been spearheading a management plan with the help of landowners and other stakeholders. An Aug. 3 webinar outlined some of the components being talked about to decrease congestion and improve the recreation experience. There will be another webinar Sept. 22 at 5:30pm. Register here. This will be to discuss the final plan, which will be available the week of Sept. 14. Details about the plan are online. 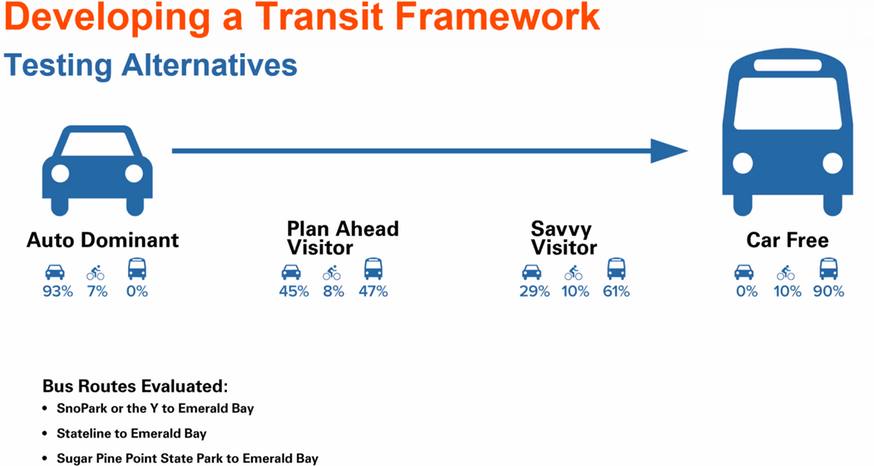 An all-transit option (far right) has been ruled to be too expensive. (Graphic: Design Workshop)

Much of what was discussed this month seemed to be wishful thinking, yet it’s all going to be wrapped into the final plan. A dramatic increase in public transit on land and water are called for, as well as a bike lane to transport people. While that bike trail is being talked about, the soonest it would be a reality is 2045.  Even if it ever gets built, that segment is only for those in really good condition. It’s not an area most families would cycle.

Stephanie Grigsby with Design Workshop called it a “sobering exercise” to learn that transit alone could not solve the problem in the Emerald Bay corridor. Financially it doesn’t pencil out with the number of buses that would be needed, let alone the addition of park/ride areas and other expenses.

That’s why a mixed approach is being suggested. This includes managing the parking situation better. On the East Shore, which is one of the six corridors identified around the lake, the parking fine this year has been nearly doubled to $700. It will take the California Legislature to increase parking fines on the Emerald Bay side of the lake. 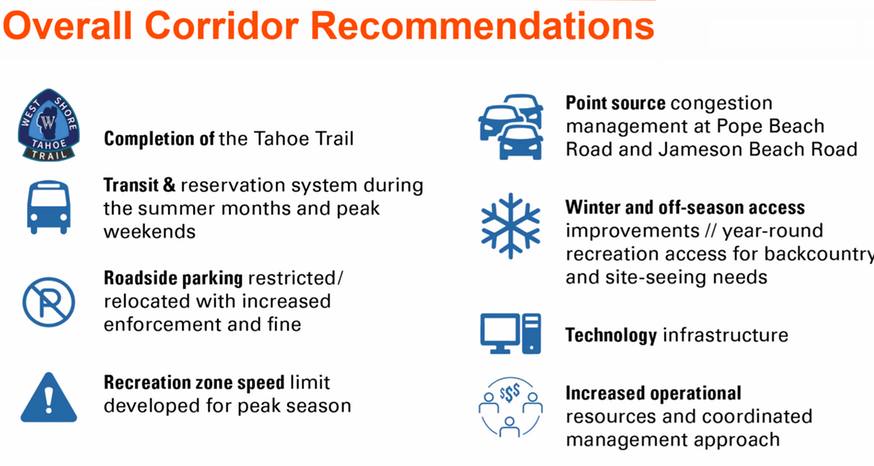 A reservation system was talked about, with officials pointing to how Muir Woods in the Bay Area did this and saw a reduction in traffic by 45 percent. Limiting the number of people via a reservation system, while making illegal parking costly are ways to decrease traffic. Tahoe officials want to remove the roadside parking, not existing parking lots. Safety and environmental concerns are said to be at the forefront to wanting to make changes.

One of the choke points is in Camp Richardson, especially in summer. Foot traffic getting to the ice cream shop is an issue as those people cross Highway 89.

“You can build overpasses, but people don’t use them,” Grigsby said. She said people won’t take the longer route, but instead will shoot across the roadway even if it’s illegal. (This was an interesting point from the consultant considering one of the components to the still talked about loop road near the state line is to have an overpass go from the casinos to Van Sickle Bi-State Park.)

What isn’t talked about during these webinars is how various tourism agencies and tourism related businesses continue to promote the Lake Tahoe-Truckee region as a place to come. Those promotions have worked, even during a pandemic. Anecdotal reports are that some businesses are having a record summer financially. But there is an imbalance in the numbers of people and what the current natural and manmade infrastructure can sustain. At some point the questions that need to be asked are: 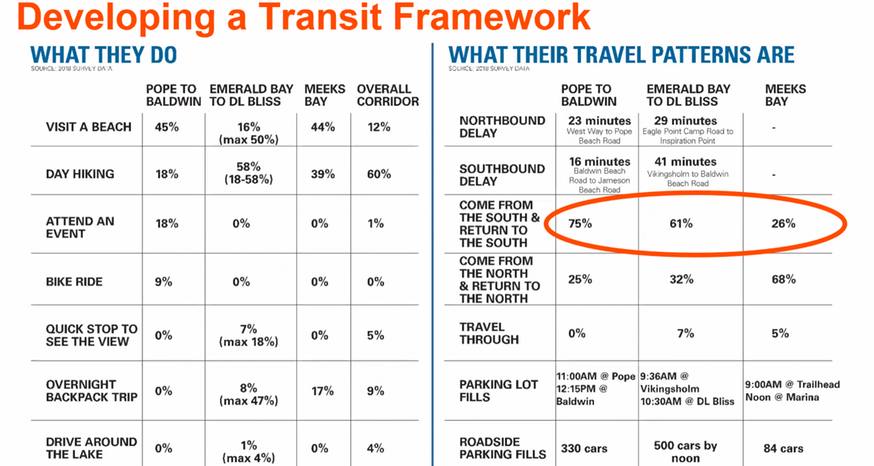 Improving winter recreation is also a component to the plan. Today most of the U.S. Forest Service sites are closed half the year, yet people are recreating there.

Buses and water ferries being considered as solutions is the norm here. Those ideas have been talked about for decades without much success. It seems like punting the problem away to say transit is going to be the answer in Tahoe. While it’s one thing to come up with a plan, it’s another to pay for those ideas. What wasn’t discussed during the corridor plan webinar was the use of micotransit, which had been a topic in May during a transit webinar.